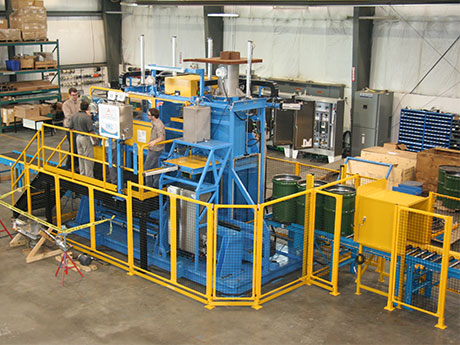 Ionic Mechatronics, a Sudbury-based manufacturer of automated industrial equipment, held an open house earlier this summer to show off a uranium packaging system it designed and built for Areva Resources in McArthur River, Saskatchewan.

The automated system loads uranium oxide into drums without the dust and spillage that occurred using previous loading equipment.

“The systems that have historically been used for drumming uranium are derived – believe it or not – from agricultural uses,” said Ionic Mechatronics president Steve Matusch. “They’re very similar to systems in use for loading grain or other non-toxic products. These systems exist throughout the uranium industry because that’s the only technology that was available.

“We have a bit of a reputation for being a very creative company, so we were approached five or six years ago by Cameco to look at a system for drumming uranium that didn’t require them to do what they did previously. Their employees would be in the drumming area and the powder would blow up all over the place. They’d have to wear head to toe suits and respirators and they had to decontaminate the area regularly.

“They asked us if we could develop a system that would be dust tight,” recalled Matusch. “Nothing like that existed in the market, so we spent a bit of time at it, looked at different concepts and this is what we came up with.”

The system for Areva is similar to the one built for Cameco, but has some modifications.

“It’s the only purpose-built system in the world that feeds uranium oxide into drums at one end and (delivers them) out the other end absolutely clean,” said Matusch.

The system built for Cameco had three stations. The first one lifted the drum to a chute for filling, the second station applied a lid and the third was designed for cleaning the drums, “but the system worked so well that they didn’t even use the cleaning station,” said Matusch.

Prior to Ionic Mechatronics’s packaging system, employees had to thoroughly inspect each drum for uranium contamination.

“It was a very elaborate process, but all of that is over with,” said Matusch.

Typically, a project of this scope takes 14 or 15 months from design to commissioning, but Areva was in a hurry and asked Ionic Mechatronics to complete the work in eight months. The order was received in October 2012, and by June 2013 the system was ready for testing.

The company is already in discussions with a uranium miner in South Africa for a third packaging system and interest is being expressed by other operations around the world.

Ionic Mechatronics in Sudbury specializes in automating electrolytic copper and nickel refineries, but also designs and builds automated assembly line systems for a wide variety of other manufacturing applications from a second location in Cambridge, Ontario.

Ionic Mechatronics employs approximately 50 engineers and technicians and outsources to machine shops and fabricators in Sudbury and other centres for many of the components that go into its systems.