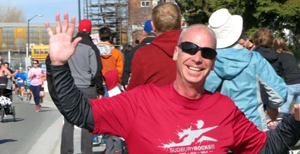 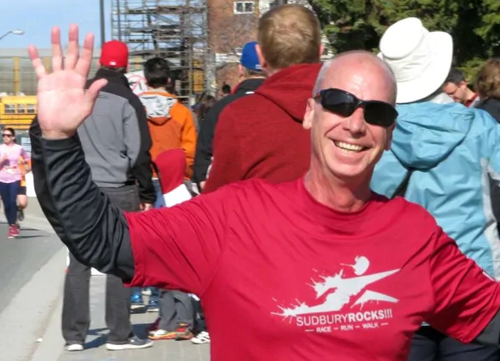 As the annual Sudbury Rocks race draws closer, many are taking time to remember the man who founded the race.

Steve Matusch started the race in 2005 but recently developed primary sclerosing cholangitis, which led to a rare and aggressive form of liver cancer. He died on March 11 at the age of 52.

Matusch’s wife, Christina Visser, says it all started when Matusch and other organizers moved a race called the Sunrun onto the streets. It had initially taken place at the trails at Laurentian. She laughs as she thinks back to that first race.

“I have to admit I didn’t attend as my daughter was six days old at the time,” she said. “So I was the supportive mother rather than the supportive wife that day.”

But Visser says Matusch was extremely proud of the success of that first event. It’s been happening each year in Sudbury ever since.

“Steve encouraged everyone to try running,” Visser said. “He wasn’t about the elite runners. I mean, he encouraged them too, of course. But he was just as happy or happier to have someone come and just be happy to finish the 5k.”

Visser says Matusch started running a few years before their children were born. He decided that Sudbury “needed to have a proper marathon and then it had to be a Boston qualifier.”

“And he made that happen in a very short time,” she recalled. “When he decided something should happen, he made it happen.”

This will be the first race held without Matusch. The half marathon, one of his favourite runs, is named in his honour.

It will also be the first time the race is held virtually, due to COVID-19, with participants choosing their own routes. Proceeds will be donated to the Northern Cancer Foundation, which supports people in Sudbury and across the region who are receiving cancer treatment.

“It’s been a challenging year,” Visser said. “The race was very important to Steve. It was part of his legacy, along with the business. This was a big deal to him, so it feels like as big a deal or a bigger deal to me than it ever has before.”

Their oldest son, Brendon, is currently away at university while Annika lives at home. Visser says she’s not sure what she and her family will do on the day of the race. She says although she’d like to gather with others on that day, current pandemic restrictions making getting together difficult.

“One way or another, it’s going to be a sad, meaningful day,” she said.

The Sudbury Rocks race will take place virtually this weekend, but it will the first time the race will be held without its founder Steve Matusch who died earlier this year. His wife Christina Visser shared her memories of that first race and of Steve with the CBC’s Martha Dillman.