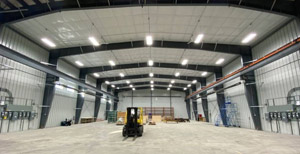 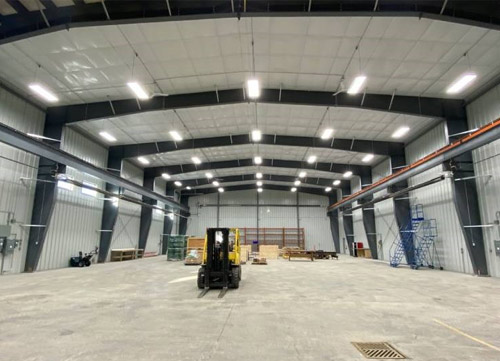 On multiple occasions over the last five years, the fabrication shop at Ionic Mechatronics was filled to capacity with ongoing projects, to the point that the Sudbury-based mining service company had considered turning down work.

It was time for an expansion, said company president André Dumais.

But even with the need so clearly presented, the million-dollar commitment to build still wasn’t an easy decision to make.

“Once you build it, you’ve got to keep it full; otherwise, you’ve got an asset that’s not making you money, ” Dumais said. “So there’s a lot of pressure to fill it up.”

He needn’t have worried.

In the last three years alone, the automation and robotics company has expanded its geographical footprint, setting up collaborations with partners in B.C., Arizona, Houston, Chile, South Africa, India and China, and is now in talks with a prospective new partner in Poland.

Even through the pandemic, the firm retained three major projects, but each was individually too big for the old shop to handle.

The most current, which Dumais described as “the largest contract we’ve signed in probably 10 years,” is destined for a mining outfit in northern Saskatchewan, with construction expected to kick off in March.

“We’re very fortunate that the work in our pipeline that was lined up pre-COVID didn’t all go away,” Dumais said. “Some of the work obviously didn’t materialize, but some of the larger projects did materialize, so the pipeline was still healthy enough to justify it.”

Planning and engineering of Ionic’s expansion started in the spring of 2019. Construction began last June, following a brief lull caused by the pandemic.

A second 8,000-square-foot pre-fab structure was added onto the existing facility, doubling its size. That’s in addition to a 2,000-square-foot mezzanine, which was completed in late 2019.

Dumais said the expansion will enable the company to get to 75 or 80 per cent of its revenue target. Should further expansion be required down the road, the property can easily accommodate another 10,000 to 12,000 square feet of building space.

“All of our growth has all been very organic and very planned; we don’t really take big, big risks,” Dumais said. “We made sure that there was a business demand before we pulled the pin.”

Want to read more stories about mining in Northern Ontario? Subscribe to our weekly newsletter.

A portion of the new space will be dedicated to the production of Ionic’s SafeBox, a mechanized safety-rated lockout system that isolates electrical, hydraulic and pneumatic sources of energy from a single location.

“SafeBox is starting to get some really good traction,” Dumais said. “I need a big chunk of space to set up an assembly component to build that piece of equipment in any sort of volume.”

Production of the device has already created full-time jobs for three people, and Dumais anticipates hiring another two to three more, depending on volume.

While pandemic-related uncertainty has put some projects on hold in non-mining sectors, Dumais said high metals prices have ensured that mining-related projects are continuing as scheduled.

And, in some cases, challenges presented by the pandemic have actually pushed companies to introduce more automation into their operations.

Dumais said his company is in discussions with a potential customer in Mongolia, aiming to build a large refinery that can be run by just 10 people, compared to the 100 it would usually require for a plant of its size.

“They’ve set as one of their targets to be the most automated refinery in the world,” Dumais said.

“I think what we’ve seen – not necessarily in the local market, but in some of the foreign markets – is a bit of a push more towards automation and doing more work with less dependence on bodies.”

The Drift features profiles on the people, companies and institutions making important contributions to Greater Sudbury’s mining sector. From exploration, operation and remediation to research and innovation, this series covers the breadth of mining-related expertise that was born out of one of the world’s richest mining camps and is now exported around the world.

Article by: By: Lindsay Kelly – www.sudburyminingsolutions.com