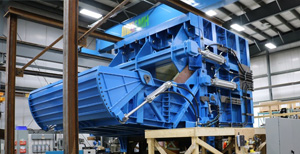 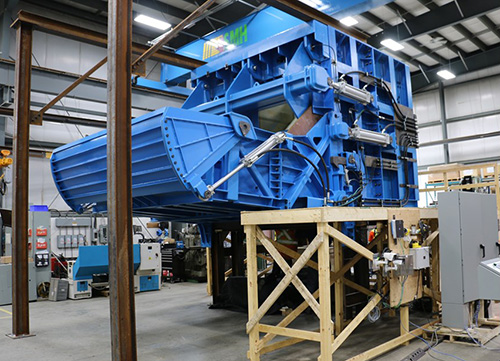 A manufacturing shop in Greater Sudbury has created the largest ore chute in the world, which will soon be shipped out and installed in one of the largest copper and gold mining operations in the world, the Rio Tinto Oyu Tolgoi mine in Mongolia.

The massive steel chute, as big as a house and with built-in safety features, was manufactured at Variant Mining Technologies in Lively. It is the prototype for several other chutes that will be installed at the mine in the coming months and years.

An ore chute is a device that allows chunks of rock (muck) to be transported by force of gravity from one level of the mine to another level. The chute is used to control the flow of muck, or waste rock, so that haulage equipment such as scooptrams, ore trucks or even underground rail cars can be loaded quickly and safely.

Variant’s website describes the company as a global leader in loading chute systems, which can explain why company designers decided to go so big.

“The size of the chute was driven by the size of the material they are actually processing and the tonnage that will be processed,” said Variant general manager Paul Chamberland.

Despite its size, Chamberland said the entire chute can be broken down into individual modules, making it easier to be moved. He added that the dismantled components can be transported down a mine ramp or loaded onto the cage in the mine shaft. That way the chute can be bolted back together and installed deep in the mine.

The project has been a few years in the making, according to Derek Meloche, Variant’s manager of business development and sales.

“So we started pursuing the client in 2016, which was our first trip to Mongolia,” said Meloche.

“Strategically, we believe that to conduct business in certain countries you need representation there to do it effectively. So we went over there with the intent of finding a partner, which we have found. We have a partner in Ulaanbaatar, which is Mongolia’s capital city.”

He said he was pleased that Ulaanbaatar is a large manufacturing hub with enough technical and industrial expertise to carry on the work.

“Our contract for Rio Tinto is to build five of these systems. We have four them being built in parallel to this one being built in Canada,” said Meloche.

He said Rio Tinto wanted the prototype put together in Sudbury so that all the functional testing could be carried out on such things as the electrical, mechanical and hydraulic engineering. He said that took place in February.

Meloche said there were challenges for Variant, not just in functionality, but also in safety designs.

“This will be the first of its kind,” Meloche said. “It is a patent-pending chute with the arc gate on the end of the lip. That is a fallen object protection for operators coming through the loading zone.”

Meloche credited Rio Tinto for putting such a high priority on safety that Variant developed new technological solutions to meet that need.

Chamberland said it was something that Variant anticipated.

“The design of this chute is all oriented towards safety. This a design we worked on for some time and basically it was the biggest selling feature with the client. We already had a design that was control-reliable and functionally safe, developed by the time this project came out for tender,” said Chamberland.

“So that is a pretty big challenge in the mining environment. There are a lot of factors that are difficult to predict. We have quite a bit of experience working in that environment with this product. So we had a pretty good understanding of what we were up against.”

Meloche said the project is a success for the Variant team and the hope is that the new chute will be adopted by other mines in Canada. Variant held an event in May to showcase the chute to a select group of mining professionals. He said mining insiders will be watching the project closely over the next few years to gauge the long-term success of the project.

“This is the early stages of this particular operation in Mongolia,” said Meloche. “By the end of the day, there will be 29 to 38 systems going into this particular mine over the next seven years. So we received the order for the first five, to develop the technologies and work out any kinks and find adjustments to make it technically perfect.”

From there he said Variant will continue to move forward on building the best mining chutes available.

Len Gillis is the editor of Sudbury Mining Solutions Journal. This story will appear in the September edition of that publication.